Barbie is the single most successful doll every produced.  Now she’s a hot mess.

The story? Barbie debuted in 1959 rockin’ a one piece black and white swimsuit and spiky plastic heels.

Barbie was kind of a doll hack, beauty and boobs and long hair all rolled in to one cellophane wrapped box.

“Barbie quickly morphed into a legend and an icon. For Barbie was both mirror and model, reflection and avatar.”

Okay, kinda blah blah blah…you don’t have to go all New York Timesey esoteric to get that with her glam red lipstick and gorgeous thick eyeliner, Barbie was the dream toy for little girls back in the day. 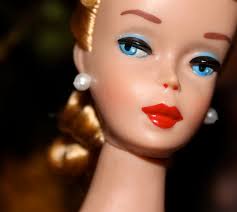 Oh sure, over the decades there was a hue and cry about Barbie’s unrealistic measurements – because pics in mags are NEVER photoshopped. But Barbie has just powered right along.

The imagination of every child with a Barbie in her life or in her future has just died a high tech death.

Mattel has plans to release a tech-savvy, wifi-connected doll called “Hello Barbie” that can have whole conversations with a child. Courtesy of a little wifi, a microchip and voice recognition software whenever a kid presses a button on the doll “Hello Barbie” asks them questions. An embedded microphone records the children’s responses and sends them to ToyTalk, a San Francisco-based startup.

ToyTalk records the information and responds. And. Responds.

No need for imagination at all. Sigh.

Tho they completely missed the point, the normal haters jumped right in.

Advocacy group Campaign for a Commercial-Free Childhood launched a petition to stop “Hello Barbie” from hitting shelves because:

Kids using ‘Hello Barbie’ won’t only be talking to a doll, they’ll be talking directly to a toy conglomerate whose only interest in them is financial. It’s creepy

The big thinkers at Georgetown’s Center for Privacy and Technology said:

In Mattel’s demo, Barbie asks many questions that would elicit a great deal of information about a child, her interests, and her family. This information could be of great value to advertisers and be used to market unfairly to children.” 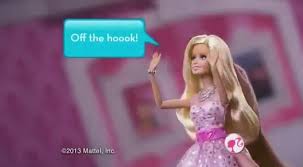 Mattel sez they want kids to form an actual relationship with their doll.

Don’t you get it?