I wrote that very phrase in the middle of March. About Lavanda. The cool English wash & fold-your-laundry-20 minutes-after-you-call service.  And I’m all about that.

If selected to participate, you get some push buttons from Amazon, stick ’em where you want ’em, push ’em when you need it and BOOM. The product shows up at your house the next day, maybe even sooner according to the WSJ.

Think a little harder though and you get creeped out.

Apparently Amazon and popular products are edging closer to anticipating your every need.

Today you push a button.

Tomorrow you don’t need to push a button cuz Tide knows when you need it.

Next month Tide will likely tell you that you are doing it wrong.

Oh goody. Laundry detergent, toilet paper and dog food are the bosses of me.

What is this “break the internet”? What does that even mean?

Hang tough for a sec.

#thedress DID break the internet this morning.

CNBC reports this morning that:

By some reckonings, Buzzfeed invented “viral,” but its deputy news director, Jon Passatino, appeared truly surprised by just how many clicks the dress generated. He tweeted that it broke the site’s traffic records, with more than 670,000 people viewing the post simultaneously at one point and garnering 16 million hits in six hours.

Neetzan Zimmerman, formerly an editor at another viral content machine, Gawker, and widely considered an expert in virality, tweeted that the dress is a “viral singularity.”

It appears to have started with a Tumblr post of the photo, headlined “what colors are this dress,” and spread from there as those who saw white-and-gold engaged in pitched battles with the blue-and-black camp.

So basically, the social-sphere aka viral singularity exploded in colorblind angst overnight.

In the event that you’ve been under a rock, while buried in a cave, located on top of a mountain and so you’ve missed it, here is the dress:

And then of course there was the internet breaking  #LlamaDrama that happened earlier yesterday when two therapy llamas made a run for it.

Apparently.  But the big thing is that the mom and youngster llamas were running around like crazy people:

The run-with-the-llama’s video could have gone bigger, but they were knocked out of greater internet breaking-ing-ness by #thedress. 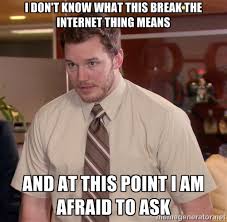 Suddenly everyone is talking about breaking the internet.  And the rise of Tumblr, instagram and our old friend Twitter makes it easier all of the time.

Google Chairman Eric Schmidt said in October that surveillance programs like the NSA are “going to end up breaking the Internet,” because foreign governments won’t trust the United States not to snoop on their online activities. And according to The Guardian, sharks could “break the Internet” by nibbling at underwater cables.

Those events might change internet. But in the context of viral media content, “breaking the Internet” means engineering one story to dominate Facebook and Twitter at the expense of more newsworthy things. (Like, for example, the fact that humans have landed a probe on a comet for a first time in history.) So perhaps a more accurate term would be “hijacking the Internet,” since really these stories seem to be manipulating online fervor rather than shutting the whole thing down.

Broken internet or not.

On a much more wholesome note; a month earlier BuzzFeed said that:

In September Taylor Swift “broke the Internet” when she wore a T-shirt saying “no it’s Becky,” a super-meta reference to a Tumblr post where a user insisted that a picture of young Taylor was, in fact, someone named Becky.

I have to get out more. Or stay in more. #Oneofthose.

So, shocking news reports this week about why menopause seems endless.  Simply put, it is endless. Really menopause? Really?

8 out of 10 middle-aged women already live through the holy hell that is hot flashes and night sweats. Imagine our delight that the “promised” short term of menopausal suffering is pretty much rainbows and unicorns.

The average is 7-ish years, which is plenty long. But docs now say that the euphemistically called “change” often lasts  much longer. 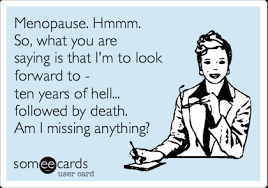 This was news that grabbed the ever-fleeting nee menopausal attention of women over a certain age.  An age like oh, say, MINE.

The study, published in the Journal of the American Medical Association was based on seventeen years of data when researchers from Wake Forest University in Winston-Salem, North Carolina, analyzed info from menopausal women. That must have been a fun job.

In a silver lining sorta way this is “told ya” confirmation for some of us. And by us, I mean those of us who have already been menopausal for over a decade. Nice to know that we aren’t actually as crazy as we seem.

How women respond to the inevitability of menopause defines us. Some of us turn bitter. Others find a way to quietly soldier on.

IMHO, the best thing about menopause of any length means laughing at ourselves. It’s really just more time to embrace the sisterhood of middle-aged women who are unafraid to laugh at themselves.

Let’s jiggle our skin, spanx up our tummies, and have another glass of wine.