Now that it’s been declared a national disaster, the ooey gooey smokin’ hot lava flow on Hawaii’s Big Island is back in the news. Seems like the volcano spewing lava just won’t take no for an answer.

We are talking MOLTEN LAVA.  The pics in your head of epic lava are probs way cooler than the nasty looking black-crusted goo streaming down the mountain side in America’s paradise of the Big Island.  Nothing epic or remotely Hollywood-esque about it. This just looks gross. 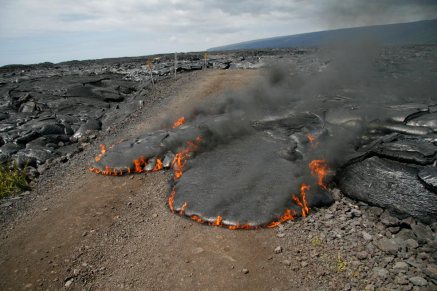 Pre-natural disaster title it’s been quiet on the lava front all week because the flow has slowed to a stop. For the time being. What’s up with the lava thing? Turns out that Pele (no, the other one) the Volcano Goddess has actually been erupting stuff for decades. You might know her better as the Kilauea Volcano, but she has been belching, spewing and burping in a very un-ladylike fashion for a long time. Thirty. Years. Long.

In this latest episode, lava has been streaming down the volcano’s side toward the northeast since June. Last weekend, it crossed a country road. It then smothered part of a cemetery, toppled trees and burned a shed, tires and grass. It’s stopping, it’s starting, it’s all whatev! Pretty much a waiting game right now with no homes lost, no loss of life. Just smokin’ hot nastiness.